Location and Directions to the Parks

Windsor Hills enjoys an optimum location at the heart of Kissimmee. Within close proximity are all the major theme parks and both Orlando international airports. Kissimmee sits to the south west of the greater Orlando conurbation. Windsor Hills is the nearest vacation rental resort community to the main WDW entrance gates (around 2 miles and 10 minutes by car). Other major theme park attractions are equally accesible: Universal Orlando, also known as Universal Studios, (15 miles and 18 minutes by car on the main I4 interstate) and Sea World (12 miles and 20 minutes by car again north east along the I4). 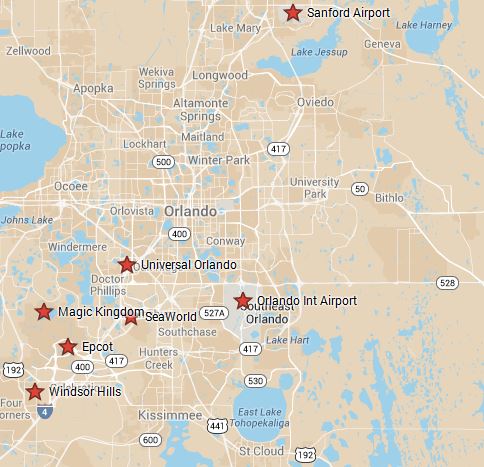 You'll hear the term 'rope drop' when holidaymakers talk about the Disney theme parks. At 9am each morning the rope is dropped and entry to car parking associated with the various parks becomes accessible. Ensuring you are at Disney in advance of this happening is important if you want to make the most of your day at Disney. Getting from Windsor Hills to the parks is a relatively simple affair; 8 minute drive to Animal Kingdom, 10 minutes to Epcot, 15minutes to Magic Kingdom. Consult the latest opening times before planning your journey times. Leaving on average around 45 minutes before opening is best advised. While driving to the parks takes little time getting parked and through the various security checks takes time and ideally you want to do all of this before 9am.

The wider Orlando area accomodates over 50 million visitors each year, with the majority attracted to the world's most famous theme parks. Golf is another huge draw and for many it's simply the year round sunny climate that brings them each year to central Florida. Two major airports serve the greater Orlando area. Orlando International (MCO) is located to the north east of the Orlando conurbation and, in relation to Windsor Hills, is best accessed along the I4 (around 23 miles and 30 minutes by car). Further to the north of MCO is Orlando Sanford International (SFB) easily reached along the 417 or I4 (around 50 miles and 55 minutes by car).

Florida's stunning gulf coast beaches are easily accessible to the west along the I4 to Clearwater and St Petersburg (around 1hr 30mins and 85 miles by car). To the east you'll find the beautiful beaches of the Atlantic coast. On the west coast Kennedy Space Centre can be reached in around 1hr 10mins 64 miles by car along the 528. Windsor Hills is located south of Orlando so access to both coasts does not require you to traverse the Orlando city area.

Windsor Hills is located at the heart of Florida golf country. The closest course, the excellent Mystic Dunes, is a mere 1.8miles and 6 mins drive by car. The resort is encircled by top class golf courses and if you are planning a trip to central Florida for a week or two of golf you have a huge selection of golf courses to choose from around Orlando.